crtl_machine_error aims to bring the public closer to this current reality through music composed in the last 10 years. In each of the works, the control over the sound result is distributed differently between the performers and the audiovisual media.

In Wings, the performers manipulate the feedback produced between the microphone and the loudspeaker through choreography. In b, there is a fusion between the technological media and the ensemble, as an electrical circuit is created between the two. Decoder is a clear example of high control of the result by the audiovisual media, since the production of the sound is determined by an algorithm. Primera Palabra symbolizes the re-humanization of the ensemble itself, through error and the reencounter with the acoustic world.

ICE3 Ensemble was born between the cities of Bern, Basel and Freiburg, as a result of the collaboration of the three musicians of Spanish origin, Núria Carbó, Santiago Villar and Javier Verduras. Its area of action ranges from the performance of contemporary classical music to the exploration of new forms of artistic expression within the current social context (reflecting on it, criticising it, as a source of inspiration or inviting reflection on it), using new technologies and seeking the fusion between sound and visual.

ICE3 Ensemble takes as a starting point the common experience of its three members within the world of percussion, to take even further the fine line that currently separates performance from interpretation, through collaboration with artists from other specialties.

ICE3 Ensemble aims to create its own repertoire through two ways: direct cooperation with different composers of the current scene and the development of a distinctive language taking audiovisual experimentation as an artistic tool. 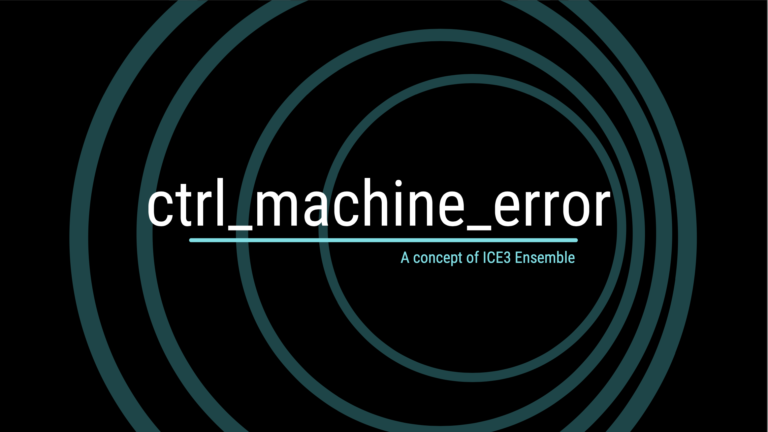 b (for 3 players, 6 effect pedals, 3 neon lamps, and a loose mono jack cable)

Decoder (for 3 players, 3 pads and video)