Amarus is a platform for music and critical thinking, hosted by Shuyue Zhao and Luis Sanz.
Amarus #7 is in cooperation with pakt bern.

PURPURA is a solo sonic unit of Andrea Nucamendi Siliceo born in Chiapas, México based in the Jura Mountains. Active since 2013 she has performed numerous times internationally, in festivals like OOO in Tokyo JP, at LUFF in Lausanne CH, at Urban Spree in Berlin, in Música Dispersa in London, at the 100 years anniversary of Dadaism at Club Voltaire in Zürich, at the Dao Xuan Festival in Vietnam, among others. She supports collectivity, inclusivity and anarchy.

PURPURA approaches to abstract electronic music with harsh soundscapes improvisations, her shows are unique in each performance with extreme sensitivity to the space/time transmitted in Sonic Chaos, for what she calls „opening the portals of the underworld“. She created the sound atmosphere of Sarah Kane's CRAVE, staged in Geneva Switzerland October 2018 by the independent theatre company Hémorragie, and constantly collaborates in multidisciplinary projects that include the practices of dance, installation, performance, video.

Performance is a collaboration between Al Fraser and Radek Rudnicki that met in Wellington via common friends in 2020. Their meeting resulted in fruitful collaboration and generation of new and exciting sound material. Duo’s performance comprises a series of works combining the sound of traditional Māori instruments Taonga pūoro and modular synthesis via contrasting textures, ambiences and rhythmic structures. Al and Radek are colliding sound worlds created with instruments made out of wood, bones and seashells with voltage controlled digital computers. Performers will join the forces via live stream linking across the planet from New Zealand and Poland.

Alistair is a widely respected player, composer, and researcher of ngā taonga puoro with a performance background that enables him to provide a sensitivity that suits the intimate nature of these remarkable instruments. Alistair Fraser has been researching, making, performing and composing with ngā taonga pūoro since 1999 and in his time has worked in a diverse range of art forms with Aotearoa’s top arts practitioners.

In 2018 Al released his solo album Toitū Te Pūoro (Rattle Records) to wide acclaim and rave reviews. Toitū Te Pūoro was cited as one of the best albums of 2018 by mic.gr (Greece), gained a five star review from muzic.net.nz an excellent review from Graham Reid at Elsewhere and was compared to works by NZ composition legends Lilburn and Rimmer. 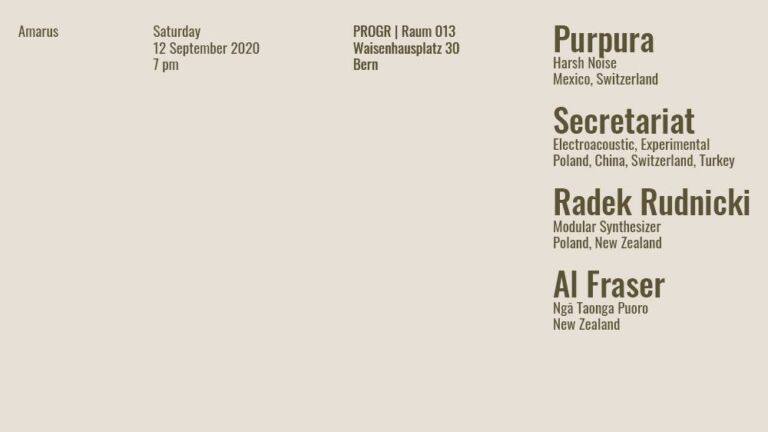